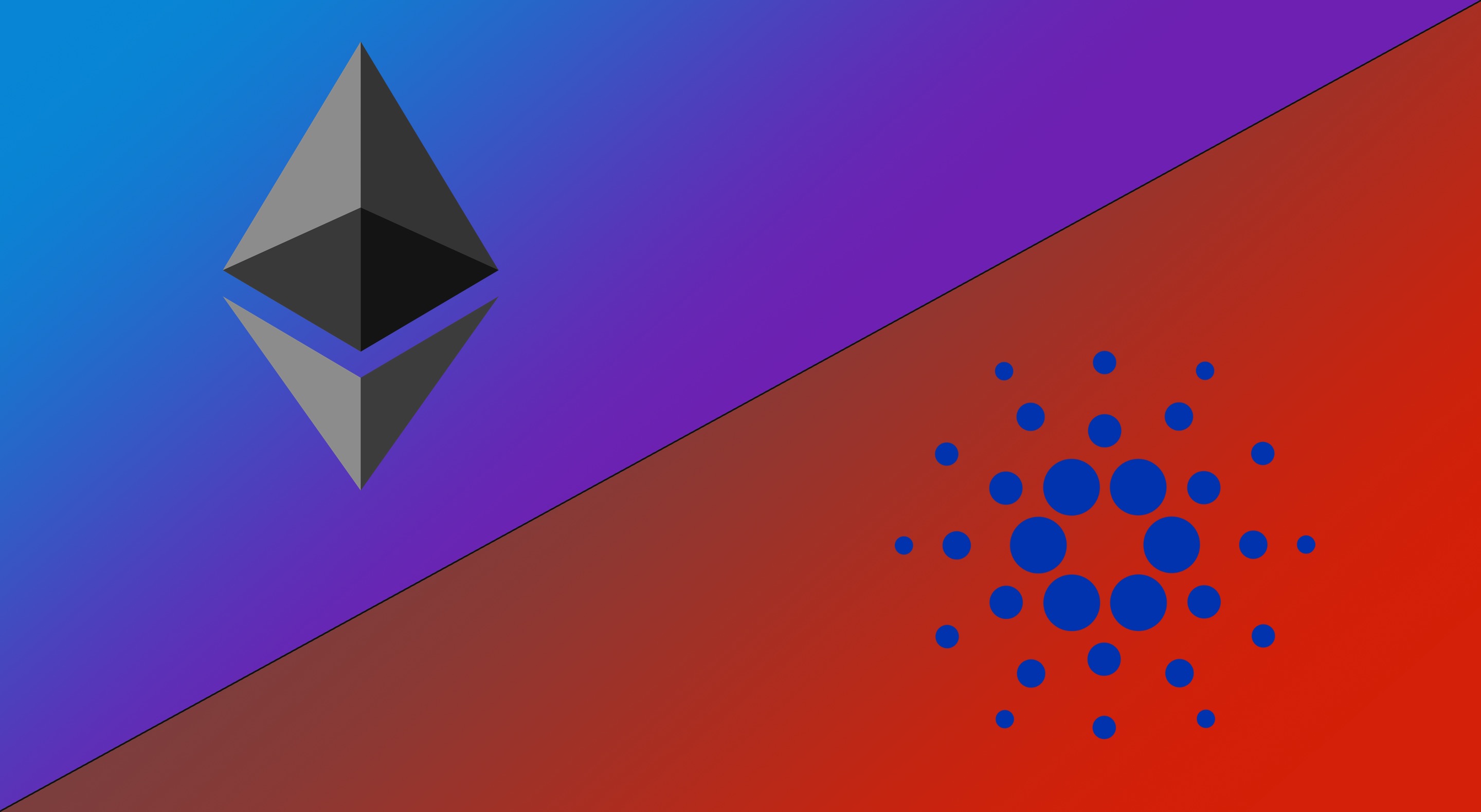 Ethereum (ETH) and Cardano (ADA) are two of the largest blockchain platforms in the world. They are also rivals with highly different aims and fiercely loyal communities.

Given their elevated profiles in the crypto world, it's fair to ask how Ethereum and Cardano compare in a head-to-head match.

This guide gives you easy to understand explanations of what Ethereum and Cardano are, the pros/cons of each, and a quick summary of key differences.

Ethereum (ETH) is a smart contract blockchain platform created by an all-star cast of cryptographers back in 2015. Today, Ethereum is primarily used for building and hosting decentralized finance applications and stablecoins.

The most significant contribution Ethereum has made to blockchain is the invention of smart contracts. Without further ado, let's review what Ethereum smart contracts are and why they matter.

It's been well over a decade since Bitcoin unleashed blockchain technology on the world. However, few understand that Bitcoin is programmable cash but is technologically capable of little else.

What is a smart contract? Smart contracts are basic lightweight computer programs running on the Ethereum blockchain. Anyone can build a smart contract containing specific rules carried out autonomously. This is how Ethereum applications operate without intermediaries — smart contracts trustfully run without anyone operating them.

If you still have trouble understanding smart contracts, look at them as digital vending machines.

When you go for a soda in a vending machine, you enter an amount of cash and select a soda. Once these two required inputs are made, the vending machine drops the soda and perhaps some change. So, like a vending machine, a smart contract operates based on pre-programmed inputs (X, Y, and Z) to deliver specific outputs (A, B, and C).

Before vending machines, someone had to sell sodas physically. But after their advent, the machine and its code handle the job. Smart contracts do the same for any contractual situation requiring trust between two or more parties. Instead of requiring someone to be trusted, smart contracts replace trust by making it implicit in the transaction.

Transition from Ethereum 1.0 to Ethereum 2.0

Smart contracts enable anyone to easily build applications on Ethereum that can, in theory, run forever without being censored. Despite the revolutionary nature of this proposition, in practice, Ethereum's potential is hampered by its proof of work consensus algorithm.

When Ethereum developers originally built the network, they borrowed the proof of work model from Bitcoin. PoW had already proven itself stable, secure, and sufficiently decentralized.

The early days of crypto saw far fewer users and transactions. Relatively low network volume meant it was easy for a PoW blockchain like Ethereum to keep up with activity. But as crypto entered the mainstream with NFT and DeFi apps all running on Ethereum, the network's inability to scale became painfully apparent.

PoW consensus works by having miners validate transactions. This keeps the network secure by guaranteeing every transaction as honest. The problem is each miner, or node, processes every single transaction on the network. Depending on traffic, some days can see upwards of 500K transactions despite Ethereum's on-paper 15 transactions per second speeds.

To combat this issue and make Ethereum vastly more robust and scalable, developers are rolling out Ethereum 2.0. The move to ETH 2.0 transitions the network from proof of work to proof of stake consensus and introduces sharding.

PoS consensus requires far less energy and computing resources, while sharding enables validators to only check transactions on a specific piece of the network rather than all of it.

By the time ETH 2.0 is complete, it should have vastly superior TPS performance than its current state. That means Ethereum will well and truly be ready to serve billions of people as a world computer.

Are you wondering when ETH 2.0 will go live? So is everyone else. In early 2021, Ethereum rolled out phase 0 with its beacon chain, but the complete launch isn't expected until some time in 2022-2023.

Ethereum is averaging over 1 million transactions per day, but even more impressive is the historical total standing at more than 1 billion Ethereum transactions.

Paying network transaction fees is the single largest use case for the ETH token. Ethereum miners are on the receiving end of gas fees to compensate for their work validating the network.

Using ETH as collateral in DeFi

The power of ETH goes beyond paying for network transactions and rewarding miners. Because the bulk of decentralized finance apps run on Ethereum, ETH tokens have reserve currency status in most liquidity pools.

Uniswap is a great example. As the world's largest decentralized exchange, it processes billions of dollars worth of trades with ETH as the base token for most pairs.

Beyond Uniswap, users mint crypto-collateralized stablecoins like DAI by depositing ETH as collateral in MakerDAO. After getting your hands on DAI or Uniswap liquidity pool tokens, you can then deposit them in DeFi vaults by Yearn Finance for additional interest yield.

The transition to Ethereum 2.0 brings ETH staking to the network. Ethereum staking is exciting for everyone because it’s profitable (you earn interest for staking ETH) and improves network performance.

Even though ETH 2.0 hasn't rolled out completely (that isn't expected until 2022), the phase 0 upgrade in January greenlit ETH staking. The rewards are decent in the best ETH staking pools but are subject to change, as in possibly increase, as time goes by.

Cardano (ADA) is a general-purpose blockchain focused on creating a highly secure, scalable, and peer-reviewed network for cryptocurrency transactions and decentralized applications.

Founded in 2015 by Ethereum co-founder Charles Hoskinson, Cardano is often compared with Ethereum due to their similarities. Like Ethereum, Cardano is a decentralized platform with smart contract capabilities.

However, that's where most similarities end. Whereas Ethereum enables creating programmable tokenized assets and apps, Cardano is primarily a financial settlement platform using its native ADA token as currency.

Over the years, many so-called Ethereum killers have risen the ranks with blustery talk of network throughput and cutting-edge consensus algorithms.

Cardano has taken an entirely different tack by heavily marketing its science-first approach. The Cardano codebase is written in Haskell; a widely-used programming language adopted precisely because of how easy it is to audit.

You might remember Ethereum developers created the Solidity programming language. It's highly specialized and few developers are adept at writing it, much less peer-reviewing Solidity code.

Why does peer-review matter? Because the more developers can review and audit code, the more airtight and secure that code is likely to be. The point is, Cardano developers want the blockchain to be as free from coding flaws as possible to mitigate potential security issues down the road.

Cardano uses a dual-layer design in its protocol that separates computations from settlements.

It's handy to think of Ethereum, a single-layer protocol that does both computation (smart contracts) and settlements (token transfers) together. Ethereum often gets jammed by the volume of computational and payment transactions mobbing Ethereum miners, resulting in high gas prices.

In contrast, Cardano's separate layers allow smart contracts and decentralized applications to exist independently of ADA token transactions. This separation should enable Cardano to scale, remain inexpensive for developers and users, and interoperate with other platforms.

Cardano uses a lightweight proof of stake consensus algorithm called Ouroboros, the name of an ancient circular symbol depicting a serpent eating its tail. The reference is clever because Cardano's proof of stake design does efficiently use network resources in a closed-loop system.

Ouroboros works by enabling ADA holders using one of the various Cardano wallets (like Daedelus) to delegate their tokens to validators keeping the network secure. The process requires far less intensive computing demands, keeping energy costs well down for running the network.

In recent months, Cardano has started touting its strength as a more environmentally-friendly blockchain than both Bitcoin and Ethereum. Charles Hoskinson estimates Cardano's energy usage at a mere 0.01% of Bitcoin's 110.53 TWh.

ADA is the native cryptocurrency token of the Cardano blockchain.

Remember that Cardano is, first and foremost, a platform for decentralized transactions using ADA currency. So don't expect flashy use cases and utility from the ADA token — it's mostly just decentralized cash with staking enabled.

ADA tokens exist on a standalone transaction layer within the Cardano blockchain. This makes sending and receiving ADA tokens a speedy experience — and cheap, too. Anyone who has been hit with crazy Ethereum gas fees will appreciate the inexpensive ADA transactions.

Given Cardano's focus on creating decentralized finance solutions for developing countries, ADA is designed as a near-instant medium of exchange capable of becoming a global currency.

Cardano upgrades in eras named after revolutionary historical figures. The network is currently in the Shelley era but is carefully rolling into the Goguen update.

In Goguen, Cardano smart contracts will finally go live on the Cardano mainnet. This upgrade will see Cardano's computation abilities and use cases level up — for reference, Ethereum has had live smart contracts since launching in 2015.

What has this all got to do with earning passive income with ADA tokens? An increase in Cardano network activity due to smart contract implementation will mean more work for validators. This, in turn, means more use for staked ADA tokens and potentially higher staking rewards.

The excitement for Goguen smart contracts is rising quickly. Cardano has initialized the Alonzo testnet, an early-stage version of smart contracts. However, despite the early phase testing, ADA holders have staked an additional $30 billion worth of ADA.

Staking ADA is a lot easier compared to Ethereum 2.0. You aren't required to lock staked ADA tokens — you can unstake ADA tokens whenever you want.

Ethereum and Cardano share founders but little else. From a wide lens perspective, they're both decentralized blockchain platforms that significantly diverge once you zoom in.

Cardano emphasizes its peer-review nature above and beyond all other facets. This is important to the Cardano team because it drives home the point that security is paramount.

On the other hand, Ethereum is a far less controlled environment full of contentious upgrades (called hardforks) and a chaotic token economy. While the Ethereum blockchain itself has remained secure since the infamous DAO hack, many decentralized applications running on it haven't.

The trade off here is Ethereum can innovate relatively quickly using a test in production ethos while Cardano is stuck formalizing small updates.

Nowhere is their difference more apparent than in regards to smart contracts. Most blockchains both large and small debut with smart contract capabilities as standard. Despite being the fifth largest cryptocurrency by market cap, Cardano still doesn't have live smart contracts.

Despite its weakness regarding smart contract capabilities, Cardano outdoes Ethereum in other ways. It boasts greater energy efficiency, scalability, and throughput owing to its dual-layer design and Ouroboros consensus.

Even if Cardano is in some ways more stiff than the flexible Ethereum network, it'll be prudent to revisit these differences once Cardano smart contracts go live in the Goguen era sometime in September 2021.

What Is THORChain (RUNE)?

Thorchain is a decentralized exchange specialized in cross-chain connectivity that allows traders to swap tokens between different networks.

Sologenic is a derivatives protocol based on the Ripple blockchain network that tokenizes and offers more than 40,000 non-blockchain assets to retail and institutional investors.

Binance Smart Chain’s elusive PancakeSwap became quite popular among DeFi investors, reaching a level where it competes against traditional DEX options like Uniswap and SushiSwap. Did PancakeSwap rightfully earn its fame and if so, how?