What Is Frax Finance? 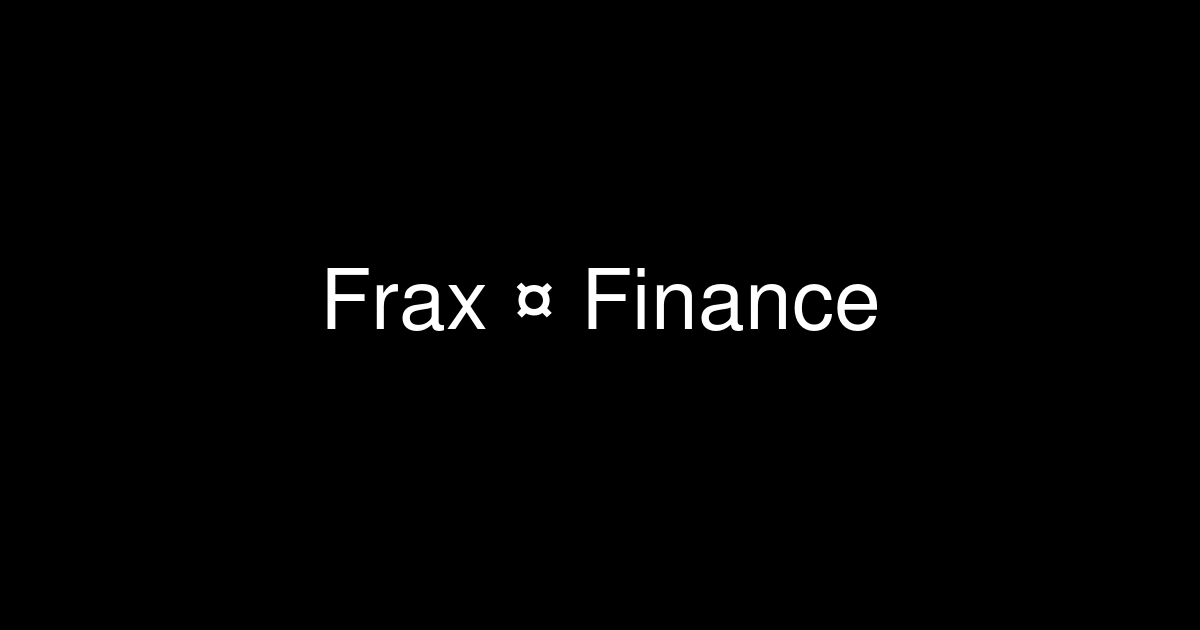 What Is Frax Finance?

Even if the Tether FUD is only typical FUD, we still have to search for other healthy alternatives that help investors with hedging against the market. For some, algorithmic stablecoins are the best option and one popular project that stands out is Frax Finance.

Without a shadow of a doubt, stablecoins are the most boring type of cryptocurrencies. After all, their primary purpose is to remain stable, so why should we spend our time researching calm stablecoins when there are mooncats, exchange tokens, and governance tokens to read about?

Jokes aside, the situation with stablecoins is more complicated than having a $1 price point. The Tether FUD, which still has to come to an end, has shown us that stablecoins are, in fact, incredibly important for the crypto market and that assets like Bitcoin cannot survive without them - at least in the trading world.

Choosing a stable coin to hedge against the market might not seem important right now, but what will you do when a multi-year bear market strikes, and you have no idea which asset to enter?

Apart from the centralized Tether (USDT) and its ambiguous reserves, there are other popular stablecoins as well. Most of the time, investors utilize ERC-20 tokens such as USDC, DAI, and TUSD. But why pick any of them if they all work in the same way?

Algorithmic stablecoins are the gamechanger and in this particular case, FRAX appears to be the best option.

What are algorithmic stablecoins?

The market cap of stablecoins has doubled since last December, growing from $20 billion to $40 billion. Although most experts speculate that the surge was aided by the rise of volume in derivative markets, another likely option is the rising demand for DeFi products.

This is important to remember because, at the same time, algorithmic stablecoins saw a small but notable rise in popularity. So, what is this new type of stablecoin crypto asset, and how does it work?

By design, algorithmic stablecoins reach a stable value and balance their circulating supply by being based on another reserve asset. These stablecoins are primarily pegged to the U.S. dollar, but it is also possible to base their supply based on gold or other fiat currencies.

As their name implies, algorithmic stablecoins function with the help of an algorithm and the core process is fairly simple: when the price increases, smart contracts mint more tokens or buys them if the price falls. In certain situations, the mechanism is supported by arbitrageurs rather than smart contracts.

This type of algo-stablecoin is not that new. In fact, the very first algorithmic stablecoin arrived in 2013 on the Bitshares blockchain. But let’s not talk about the first generation models; in this article, we will talk about the segment’s newest entrant: Frax Finance.

What is Frax Finance?

Frax Finance is a blockchain project featuring the FRAX token, an algorithmic stable coin that is partially collateralized. Basically, it can be minted by any individual who provides two essential tokens: USDC and FXS, which is the protocol’s so-called ‘share token.’

The minting process uses a collateral ratio to create new tokens. In the case of a 50% collateral ratio, the individual would have to provide $0.5 of USDC and $0.5 of FXS to mint one FRAX.

At any point in time, users can redeem the FRAX token for $1 with the same collateral process that we have previously described. If the user wants to go back to his previous assets, he can repeat the process and receive $0.5 USDC and $0.5 FXS for the single FRAX token.

Unlike other stablecoins like DAI, FRAX is only partially collateralized to USDC. FRAX’s reserve of USDC is always lower than the amount of circulating FRAX tokens.

To safeguard its stable ratio against the USDC, Frax Finance utilizes arbitrageurs who are financially incentivized to buy FRAX and redeem it if the token goes below $1. By doing so, they make a profit and create a buying pressure that restores the token’s stability.

Likewise, the same arbitrageurs restore FRAX’s original value if it goes above $1. They will mint FRAX using USDC and FXS and sell the token to profit, which pushes the price down with enough selling pressure.

Why should investors hold FXS?

USDC is already popular and used by many, so what encourages the demand for FXS shares, which is needed to mint FRAX?

FXS holders are incentivized to invest in the token due to the fact that FRAX’s minting mechanism creates demand for FXS. As long as users seek to move their assets into the stablecoin, there will always be buying pressure for the protocol’s other token. Moreover, FXS holders benefit from the fact that once new FRAX tokens are minted, a proportional number of FXS tokens are burned.

Since FXS’s usage is heavily tied to the design of the FRAX stablecoin, its price increases with the rise of FRAX’s adoption. The more FRAX tokens are minted, the higher the value of these so-called shares.

Although not yet a formidable opponent in the stablecoin arena, FXS managed to survive the market despite being dependent on FRAX’s adoption, which is obviously incredibly low at the project’s very beginning.

As for the risks, FXS suffers from potential volatility, which can arrive if the FRAX stablecoin changes its distance from the focused $1 price point. As previously explained, arbitrageurs profit by keeping FRAX in line, and at both ends of the spectrum (buying and selling), FXS is either sold or bought.

Such an environment creates massive fluctuations for FXS, which can occur if FRAX moves too far. For investors, this can turn into a nightmare if FXS constantly ranges at a certain price level. However, we are fairly certain that active traders will have a good time buying the lows and selling the highs.

What does the future hold for Frax Finance?

At the moment, Frax Finance is only another algorithmic stablecoin that attempts to create a revolutionary product by approaching the price stability problem differently. Its primary intricacies are hidden behind a deep mathematical layer that is too complex to explain in layman’s terms, but surely enough real adoption will show whether their model is successful or not.

In the near future, the Frax Finance team will launch more user-friendly features that seek to improve FRAX’s utility and bring other DeFi-related novelties as well.

As of recently, the team has already introduced brand new features, like staking and yield farming. Users have the chance to participate in liquidity pools that offer FXS rewards, and we have to say that they are pretty high.

According to data from the Frax Finance platform, staking grants an APR of 50%. Near the start, rewards grew to an astonishing rate of 79%, and per the Frax team, rewards should be capable of maintaining that range.

Algorithmic stablecoins are on the rise in 2021, and tokens like AMPL, MIC, DSD, ESD, and FRAX grow by the day both in terms of adoption and value.

Within that list, FRAX is one of the rare algo-stablecoins to work in practice. The stablecoin succeeds in doing its only important job, maintaining the $1 price range.

Does Frax Finance drive its success from being partially collateralized? Certainly so. If it weren’t for USDC, FRAX would most likely be a volatile mess that cannot maintain a stable rate, but that is thankfully not the case.

With the arrival of FRAX V2, the team is pushing the levels of algorithmic stablecoin innovation. By pushing towards adoption for various DeFi-related features, the project will certainly earn itself a strong position in both the regular and irregular crypto markets.

We still have to find out how long it will take for FRAX to entrench itself in the stablecoin niche. FXS investors will most likely have to lobby for their stablecoin since their asset’s valuation is solely based on FRAX’s adoption.