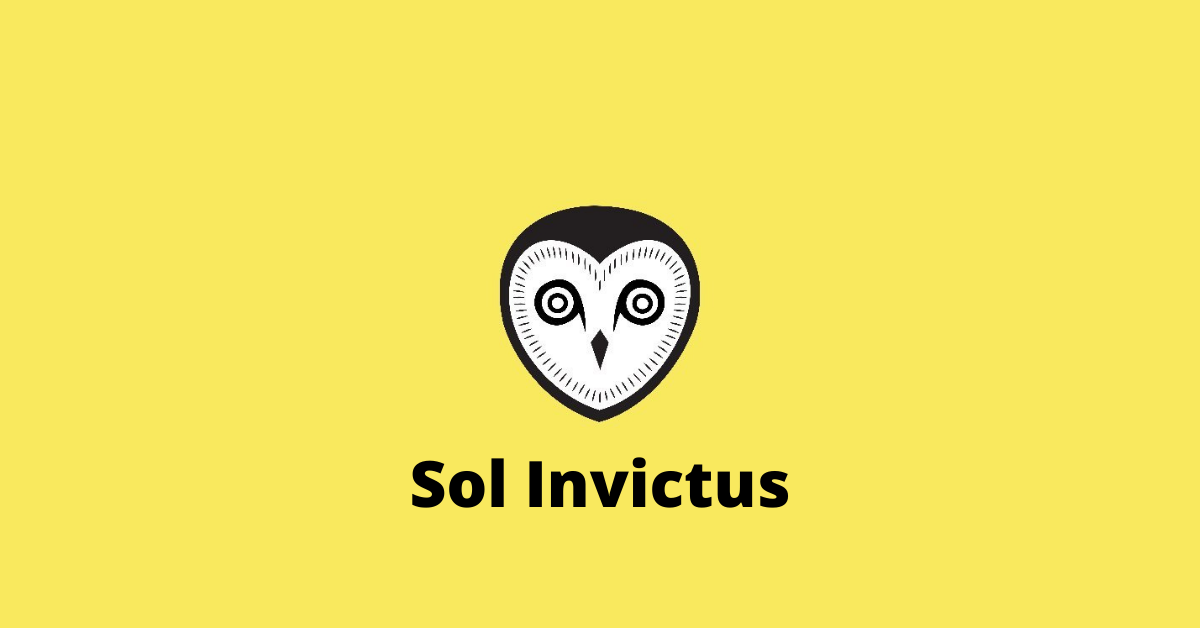 Olympus DAO is the most widely forked crypto project in 2021. Developers have spawned carbon copies across popular blockchain networks, most noticeably on AVAX and BSC. But do these forks bring anything new to the table? In this article, we explore one project that shakes up the status quo by utilizing the performance boost of its native chain to deliver a vastly improved user experience and significantly higher rewards.

Sol Invictus is yet another OHM fork, or so we are led to believe. It is the first and only OHM-like project to launch on the Solana ecosystem. The most interesting detail about it? It’s technically not a fork.

Although its anonymous creators copied the concept and design behind (3, 3), the entire project is built from the ground up with original code. More importantly, the developers introduced new features as well, the most important one is dynamic rebasing.

To summarize, Sol Invictus is a decentralized reserve currency. Its native $IN token is backed by a basket of assets (USDC, USDT, IN/USDC LP, and mSOL) which fund the protocol’s staking rewards. Unlike OHM forks, $IN is not designed as a stablecoin per the words of the team.

What is Sol Invictus?

To everyone’s surprise, Sol Invictus is not even an OHM fork. Developers coded the project from start to finish in Rust, the main programming language for developing dApps at Solana. The team borrowed Olympus DAO’s concept and packaged it in a new format that reaps the benefits of Solana’s ultra-fast blockchain network.

Having the technical ability to code such a complex blockchain platform in an entirely different programming language is what helped the team set Sol Invictus apart from other forks, assuring investors that the project is much more than a simple copy-paste.

But then again, Sol Invictus is still an OHM derivative. If you have previously meddled with Olympus DAO, you already have a perfect understanding of how Invictus works, excluding a few novelties.

The main difference between the two is that Invictus utilizes Solana’s low-cost fast-transaction throughput to deliver the DeFi experience that Web3 enthusiasts crave. An example of what Solana and game theory make possible is dynamic rebasing.

OHM and OHM-like projects reward stakers once every eight hours in a process called rebasing. Rebasing periodically adjusts a token's circulating supply in response to price fluctuations. Rebasing either burns or adds tokens to the supply depending on which way the market moved. Rebasing adjusts the token's price without bearing any effects on the value held by token holders.

Protocols award their native token to stakers after the end of each rebasing period. These tokens are automatically deposited (and auto-compounded) along with the original staked amount in order to maximize rewards. Since rebasing periods last about eight hours, stakers earn rewards three times a day.

Sol Invictus took a novel approach to rebasing by introducing dynamic rebasing. Here, rebases take place after every new transaction block. If you remember just how fast Solana is, you begin to understand why dynamic rebasing is so revolutionary.

The Solana blockchain network boasts a ludicrous speed of up to 50,000 transactions per second and a 720ms blocktime. Since Solana generates new blocks in less than a second, Sol Invictus stakers enjoy near-constant reward streams.

We mentioned earlier that protocols automatically deposit rewards into your staking balance, effectively compounding profits. A holder’s yield increases after each rebase cycle thanks to their growing balance. On OHM, this happens every eight hours. On Sol Invictus, the APY stacks constantly.

A highly efficient reward model is not the only benefit of dynamic rebasing. The feature also counteracts periodical token offloading, a process in which large holders exert significant pressure on the market by selling rewards received immediately following a rebase period. Dynamic rebasing ensures even reward distribution across all time frames and negates the aforementioned effect.

Staking $IN tokens is the easiest and fastest way to obtain rewards on Sol Invictus. It also represents the project’s primary token distribution model. The protocol does not enforce lock-up periods, and users are free to unstake or sell their rewards at any point in time. Rewards also auto-compound, allowing investors to stake and forget.

To stake, one must first get a hold of $IN tokens. You can purchase these tokens at the team’s official IN/USDC Raydium liquidity pool. Once bought, users have to connect their wallet to the Sol Invictus app and choose the amount of $IN they wish to stake.

Bonding is the secondary mode of $IN token distribution. Bonding involves providing liquidity to the protocol (in this case, the Sol Invictus treasury) in return for $IN. Users who bond must vest their assets for a period of five-days. The protocol features four bonds in total:

Each bond has its own respective ROI and discount rate. Rather than paying them out in full at maturity, Sol Invictus pays out bonds in a linear manner: tiny portions of the bond are paid throughout the duration of the vesting period. Bonds also have undisclosed ceilings. Once one reaches the ceiling , the protocol closes the bond temporarily.

Fair launches ensure that tokens remain evenly distributed to all participants and that large holders do not gain the upper hand.

In the case of Sol Invictus, the creators decided to implement a merit-based system to reward active participants and ensure a fair launch. This was done with the help of ‘The Great Game.’

‘The Great Game’ is a puzzle that predated the project’s launch and involved a number of tasks that granted community members special roles. Here is a list of tasks and roles.

“This fair launch mechanic was deemed a success from the team's point of view, no whitelist, no non-organic growth to fuel a discord server, only the ability to solve a simple puzzle.”

All in all, it literally paid to be an active participant in the Sol Invictus Discord server since early investors had the opportunity to buy or bond $IN at below-market rates. Ablaze and Radiant users reap the benefits to this day as they have an intel priority concerning future updates and features over other users.

Getting Started With Sol Invictus (◎,◎)

Interested in trying out Sol Invictus’ implementation of (3, 3) game theory? Read our step-by-step guide below to get started.

First things first, you need a Solana-compatible crypto wallet to interact with the Sol Invictus app. Sol Invictus currently supports four different wallets. For a seamless experience, the team recommends setting up either a Phantom or Slope wallet. Both wallets are non-custodial and come in the form of a web browser extension.

Remember to conduct your due diligence when creating a new wallet. Make sure to back up your seed phrases and use a unique password. If you already have a Solana-based wallet, we advise you to use a burner account just in case.

Step 2. Fund Your Wallet and Buy $IN

Now that you have a compatible wallet, go ahead and fund your account in order to proceed with purchasing $IN. You can do so by depositing SOL, USDC, or RAY. If you do not possess existing crypto funds, Phantom and Slope allow you to purchase SOL directly from the wallet through a 3rd-party entity.

After depositing funds, you can swap your assets for $IN with the help of Raydium. In the case that you wish to buy at a certain price-level and happen to own USDC, you can set a limit order at the official IN/USDC trading pair.

Keep in mind that $IN is momentarily only available on Raydium. We urge you to refrain from trading your tokens on unofficial markets.

After completing your trade, head over to the official Sol Invictus website and connect your wallet with the app.

Select the ‘Stake’ tab and click ‘Max’ to input the maximum number of $IN tokens owned. Next, click Stake In and confirm the transaction. Your IN balance will now be found at ‘Your Staked Balance’ where it will steadily rise.

With most smart contracts being open-source, especially in a risky sector such as DeFi, it is nearly impossible to prevent developers from copying the work of others. Fascinating ideas and concepts will always find their place on other blockchain networks. However, copycats are at times warranted if competitors manage to deliver new and improved features.

In the case of Sol Invictus, we see a team that is aware of Ethereum’s limitations and the advantage Solana’s TPS offers to a decentralized reserve currency concept like OHM. By transforming rebasing into a constant process that automatically compounds interest and rewards users at every waking moment, Sol Invictus has drastically improved the original (3, 3) recipe. They have turned it into a business model that is, according to some investors in the crypto community, far more rewarding than any other OHM-like product.

About The Author:
Marko
Marko is a crypto enthusiast who has been involved in the blockchain industry since 2018. When not charting, tweeting on CT, or researching Solana NFTs, he likes to read about psychology, InfoSec, and geopolitics.

