The Top 5 Crypto Metaverse Projects To Watch in 2022 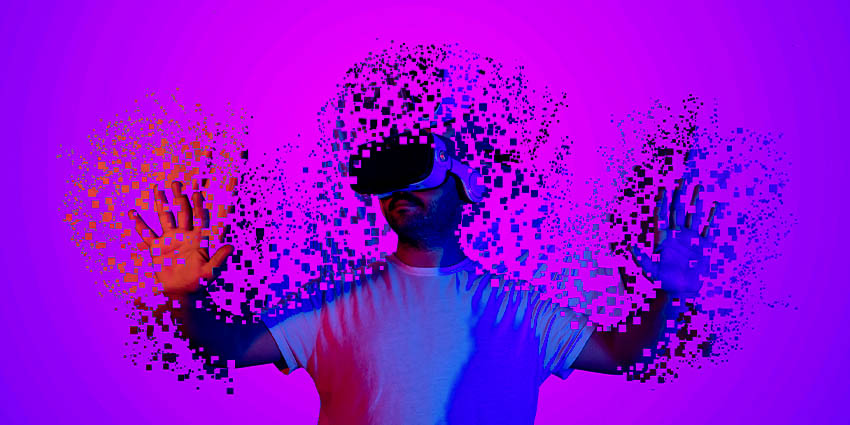 The Top 5 Crypto Metaverse Projects To Watch in 2022

Talk of the metaverse is everywhere you look. Even Mark Zuckerburg, one of the wealthiest and most influential people alive, has gone down the metaverse rabbit hole, rebranding his companies into the conglomerate known as Meta.

Since then, cryptocurrency projects enabling metaverse experiences have seen unthinkable price movements to the upside. Short-term speculators and long-term investors alike are calling the metaverse a new paradigm in the hopes of sparking even greater market returns.

How much of that speculation is pure hype, and how much has substance? While we might still be far off from a fully-immersive version of the metaverse, recent times show us that the world is rapidly going digital. Remote work, Zoom calls, and countless hours spent online gaming are already commonplace, so in the next few years we might be living in shared virtual spaces in the metaverse.

Metaverse projects are evolving quickly, which makes tracking them essential for any investor or technology enthusiast. Here’s a list of the five best crypto metaverse projects worth watching.

The metaverse is a shared 3D-space that’s just like the Internet, except it allows you to interact with a virtual environment that emulates the physical world. Many see this new idea as the Internet’s natural evolution.

While that’s the gist, there are more opinions of what the metaverse is or can be. Some developers see the metaverse as a place accessed by people wearing VR headsets. In contrast, others think the metaverse might become integrated with the physical plane using augmented reality (AR) devices.

Regardless of which view appeals to you more, the metaverse is still in its infancy — though that hasn’t staved off the early adopters. Novel metaverse spaces such as Axie Infinity are popping up in the blockchain gaming world, and digital real-estate is selling for six-figure sums on Treeverse.

So, despite these being early days, there’s no shortage of metaverse tokens backed by projects building new digital experiences. It’s impossible to know which projects will survive, but the following examples should be on your radar if you’re getting involved in the nascent metaverse space.

Keeping up with the constant slew of new metaverse projects is tough, so here are five that should be on your radar as a starting point. These projects feature strong backers, early adoption, and are making a mark in this burgeoning new industry. Let’s dive in below.

Valued at almost $5 billion, Decentraland is one of the most exciting projects to come out of the metaverse trend. Created back in 2015, Decentraland was originally just a bunch of pixels. But today, the project is a fully interactive 3D world filled with people living second lives in detailed virtual spaces.

Decentraland boasts everything from virtual casinos and rollercoasters to actual music festivals, art exhibits in galleries, and cafes. Recently, Decentraland had virtual land sales in excess of $2 million, proving just how large some investors are betting on the success of second life-like metaverse spaces.

To do anything in Decentraland, you always need to keep a bit of the platform’s native MANA token in your wallet. Presuming things play out as predicted by Neal Stephenson’s classic metaverse novel Snow Crash, today’s digital land and MANA speculators may very well be the land barons of tomorrow.

You might have heard the news that Adidas (yes, that Adidas) has chosen to collaborate with The Sandbox. But what is this new gaming platform, and how does it relate to the metaverse?

The Sandbox aims to be a metaverse where gamers and creators can monetize their actions in a fun, inclusive digital landscape for everyone. With virtual land, a unique marketplace of NFT items, and an almost $5 billion valuation, The Sandbox hopes to become a one-stop-shop for those diving deeper into digital living.

Operating on a similar level as Roblox does, The Sandbox allows creators to design and launch custom games while earning crypto from their creations. The entire ecosystem is powered by SAND, the platform’s native token. Moreover, The Sandbox’s graphics engine is incredible, even though at the time of writing it exists as an alpha product.

The Sandbox is undoubtedly a project to keep on your radar, as things are heating up for the platform thanks in large part to strong support from Animoca Brands.

Initially released back in 2018, Axie Infinity has been one of the most interesting experiments to play out in the wild world of crypto. During the COVID-19 pandemic, many experienced economic hardship, and those in the Philippines were hit hard, facing an already bleak job market. Thankfully, many were able to earn a living playing Axie Infinity, spreading its popularity to around two million daily users. That helped Axie outperform other blockchain-based games by a wide margin.

To play, users buy, breed, and battle creatures called Axies to upgrade them and eventually sell them on the market. This play-to-earn model has caught on, and many are trying to emulate the success of Axie Infinity, as well as its meteoric rise in price.

Amongst all metaverse and blockchain gaming projects, Axie Infinity has seen the earliest success (in terms of adoption) and continues to hold its price even in downtrends. Keep AXS on your watchlist; it looks like it’s staying in the public eye for quite some time.

Enjin and its native token ENJ aim to help blockchain-based games issue, manage and monetize digital NFT collectibles such as in-game items. With the rise of metaverse games and NFTs in general, Enjin has innovated on NFT item issuance and marketplaces for years. For instance, Enjin created the ERC-1155 token standard, one of the most issued NFT token types today.

Given the current adoption rate of ERC-1155 as a token standard, most games issuing NFTs may tie into the Enjin ecosystem. As the gaming industry continues growing along with the need for virtual asset management, Enjin’s potential has few limits. ENJ is currently valued at around $2.5 billion and represents a solid bet on the gaming industry’s future.

Gala Games is a blockchain gaming company founded by Eric Schiermeyer, co-founder of Zynga (the platform behind the immensely popular Farmville game). As founders see it, blockchain games and NFTs are a core component of the metaverse and the logical evolution of gaming more generally.

So far, Gala has released games called Town Star, a simulation game allowing users to create farms and cities that earn NFTs, TownCoins, and Vox. While it’s still in early development, Gala Games has immense promise by dint of its founder’s previous success and is among the more experienced teams building a gaming metaverse today.

Perhaps most intriguing for players is Gala Games’ fundamental belief that players should shape the roadmap of the metaverse. Compared with other projects on this list, GALA reads like an underdog but shouldn’t be overlooked.

Despite expectations that the metaverse should already resemble scenes from Ready Player One, current graphics leave much to the imagination. Decentraland, Axie Infinity, Gala Games, and others are all graphically on par with Nintendo 64 – but is that a reason to bet against the metaverse?

The answer is a definite no. Despite the current limitations of metaverse games and experiences, their capabilities are likely to expand as blockchain technology scales. Moreover, even if games such as Axie resemble the early PlayStation days, their massive-multiplayer connectivity and NFT marketplaces display immense promise.

Want to track these projects in your portfolio? Here’s how you can build an automated metaverse index fund on Shrimpy. And if you haven’t signed up yet, check us out and get started for free on www.shrimpy.io.